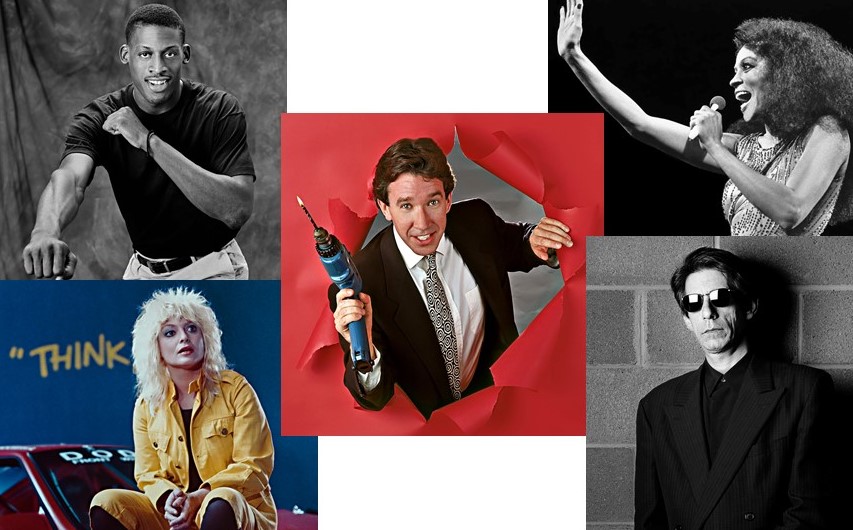 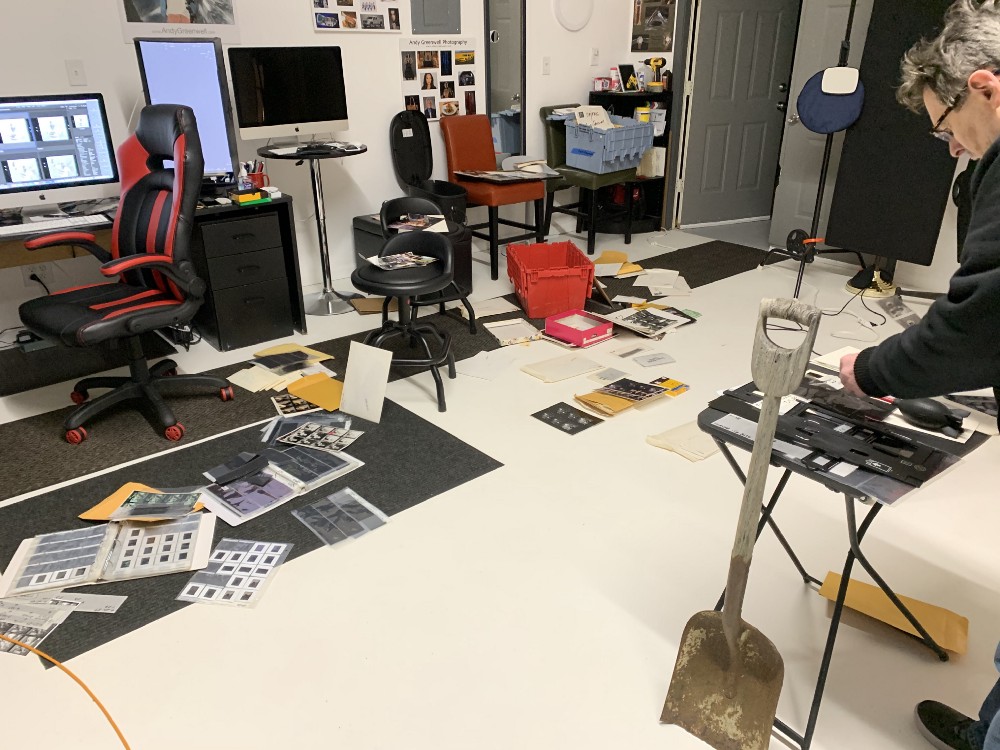 Since the COVID-19 shelter-in-place began, Andy Greenwell has been singularly focused on a project he calls “Turning Negatives Into Positives.” Like many people languishing at home in semi-quarantine, Andy is using his free time to sort through old photos.  But the number and subjects of his photos are like no other.

“These are celebrity photos,” Andy says, pointing to a mishmash pile of transparencies, negatives, and slides.  “These are comedians, these are sports figures, here are musicians, and those are products.”  Other piles spill out on a long table in the stark white studio, along with stacks of prints, contact sheets, and envelopes splayed across the floor.

The ambitious undertaking to convert negatives dating from the early ‘80s to late ‘90s into digital images is part pragmatism, part inspiration, and part therapy.  “Converting the archive has always been on my list of things to do, but running a small business alone, I’ve never had time to take the project on,” says Andy.  “Now I do.”

The archive itself has been a challenge to assemble.  Three moving trucks loaded with gear and files delivered Andy’s opus to its current home two years ago when Andy and I purchased a ‘50s ranch with a large outbuilding (converted to studio space) and moved operations from a much larger industrial-park space in Farmington Hills.  In the move, boxes of negatives were lost and already-random files became more dispersed.  “It took a full week to assemble this pile,” says Andy, “and I found another batch just last night.”

Each negative is individually cleaned and mounted into a specially designed holder, which is then mounted onto a clamp suspended on a C-stand.  Studio lighting provides illumination.  Using a Nikon digital camera, Andy shoots multiple exposures of each negative, checks the quality, names the photo, and sets it aside to adjust and retouch later.  Each final image represents about an hour of work.

With each photo comes a story – but not a long one. Andy is a man of few words.  What was John Salley like?  “Hilarious.”  What happened to this model?  “She got married and had a few kids.  We’re friends on Facebook.”  What was Richard Belzer like?  “Not a smiler.  Not a talker.”  Which celebrity was the hardest to work with?  “Not saying.  But you’d be surprised….”

Other stories emerge without prompting.  “This guy,” he says, holding a color transparency up to a light in one hand and a loupe in the other, “this guy standing by the Duesenberg was probably the nicest guy I ever photographed.”  The memory inspires a quick Google search, where he discovers that the subject died last year.  “I wonder if the family would like any of these photos,” he muses.  Moments later, a photo of a Champaign, IL-based rock band leads to a story about the band’s legendary rendition of “When a Man Loves a Woman,” more searches, and some friend requests.

A photo of fighter jets prompts a longer tale about nearly falling out the open door of a companion plane while shooting skydivers.  Andy’s life was spared by a fast-thinking camera crew member, who grabbed him by the belt as he tumbled toward the open door.

Every photo in the hands of a different photographer would look a little different, depending on the life experiences, skill, equipment, and unique vision of the person behind the camera.

Andy’s vision was shaped growing up in a small, single-traffic-light town in eastern central Illinois.  Martinsville, IL, was home to hard-working Midwesterners, including his family of six, where his dad owned a shoe repair business and delivered propane gas and his mom was a seamstress.

Andy graduated from Eastern Illinois University with a degree in communications.  There he discovered his passion for videography and photography.  He began his career as a cameraman for TV news, then for PM Magazine in Champaign, and later in Detroit, where he earned an Emmy award and multiple nominations for his work.  He launched an independent business in 1987 and quickly became a sought-after photographer and cinematographer in the Midwest for celebrities, athletes, models, and businesses, as well as a popular instructor, with packed photography workshops.

But the vocation became more challenging with the explosion of do-it-yourself digital photography, cell phone cameras, slashed automaker marketing budgets, and the Great Recession of 2008.  Few commercial photography businesses in the Detroit area survived the brutal market conditions of the century’s first decade, but Greenwell held on to the career he felt called to by living simply and even moving into his leased studio space.  Through it all, he remained productive and continued creative work.  In recent years, his business had begun to rebound, with new clients and expanded reach.  The pandemic brought that growth to an abrupt stop, temporarily.

The “Turning Negatives into Positives” project will deliver no revenue, but it is a way to get through the shutdown productively and to cultivate gratitude. Dipping into the past to revisit and celebrate creative accomplishments is salve for the soul.  And now?  The project is in the final stages as the studio reopens – ready to create new memories and brand-building photos for clients throughout the Midwest. The pandemic has been a strain on every business, but it hasn’t been wasted time for all. Negatives, it seems, can become positives…with a lot of work.

“I HATE having my picture taken!”: Five Tips for the Reluctant Subject
August 6, 2018
Greenwell Photography Studio Reaches Major Milestone
August 12, 2019
The Art of Working Well Together as a Couple
April 6, 2021